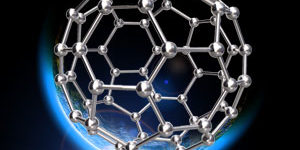 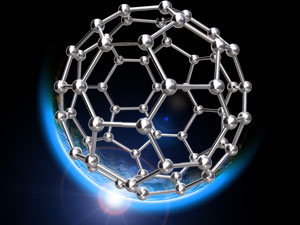 Researchers at the Virginia Tech Carilion Research Institute have reported the first experimental evidence that supports the theory that a soccer ball-shaped nanoparticle commonly called a buckyball is the result of a breakdown of larger structures rather than being built atom-by-atom from the ground up.

Technically known as fullerenes, these spherical carbon molecules have shown great promise for uses in medicine, solar energy, and optoelectronics. But finding applications for these peculiar structures has been difficult because no one knows exactly how they are formed.

Two theories compete regarding the molecular mechanisms that make fullerenes. The first and oldest is the “bottom-up” theory, which says these carbon cages are built atom-by-atom, like the construction of a Lego model. The second, more recent, theory takes a “top-down” approach, suggesting that fullerenes form when much larger structures break into constituent parts.

After several years of debate with little more than computational models in support of how the top-down theory might work, researchers led by Harry Dorn, a professor at the research institute, have discovered the missing link: asymmetrical fullerenes that are formed from larger structures appear to settle into stable fullerenes.

The discovery appeared online Sept. 15 in the journal Nature Chemistry.

“Understanding the molecular mechanics of how fullerenes and their many variations are formed is not just a curiosity,” said Dorn, who has been researching metallofullerenes – fullerenes with a few atoms of metal held within – for more than two decades. “It would give us insights into new, better ways to prepare them. Fullerenes and metallofullerenes are already involved in hundreds of biomedical studies. The ability to create large numbers of a wide variety of metallofullerenes would be a giant building block that would take the field to new heights.”