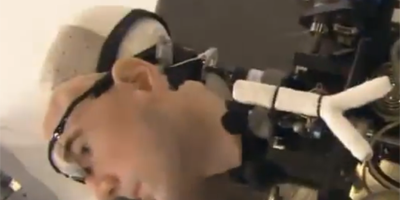 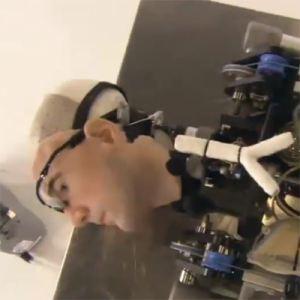 London’s Shadow Robot Co. tours its “bionic man,” a walking, breathing humanoid robot built from the latest and greatest in medical prosthetics, including artificial limbs, an artificial spleen and an artificial personality.

Shadow Robot Co.’s so-called bionic man is making its way across the world, parading about a $1 million worth of advanced medical prosthetics that allow him to walk, breath and even hold light conversation.

The bionic man, the 1st of his kind, is a composite of parts from various medical device makers, including robotic feet and ankles from Massachusetts-based BiOM, an artificial heart made by Arizona’s SynCardia Systems and a retinal prosthesis from California’s Second Sight Medical.

The bionic man’s experimental “circulatory system” with nano-based blood can bind and give off oxygen, and robotic exoskeleton allows him to walk. His prosthetic organs include a kidney, pancreas, spleen, lungs and a trachea, and he has a cochlear implant, speech recognition and speech production systems, LiveScience.com reported.

His prosthetic hands are the i-LIMB prosthetics from Touch Bionics, and his personality comes from an advanced chat-bot program that Shadow Robot’s Rich Walker says is reminiscent of “an annoying 13-year-old boy from the Ukraine.”

Walker and others at Shadow Robot hope not only to display the impressive advances in medical technology, but to raise questions about healthcare access and human longevity. .

“The preservation of life and quality of life has become basically a technical question and an economic question,” according to Walker.

See the bionic man in action: